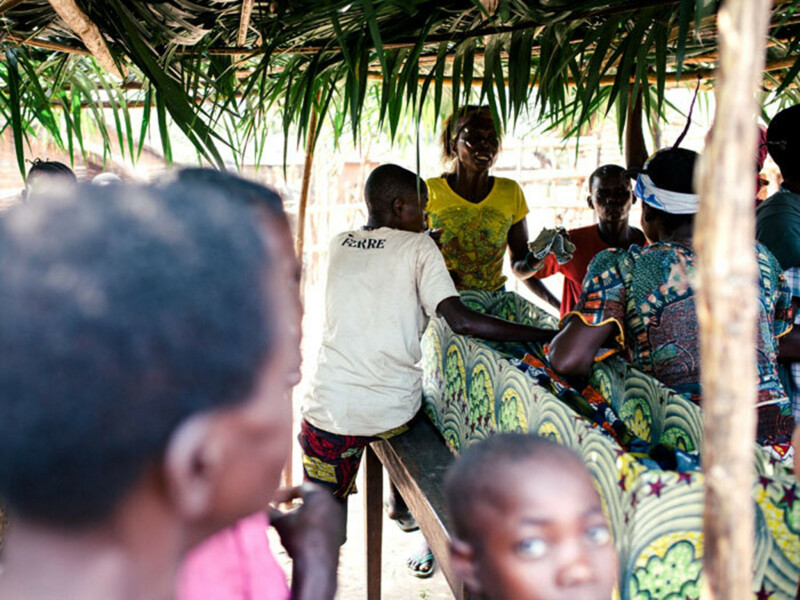 The Luba-Kasai people are an ethno-linguistic group to the central region of the Democratic Republic of the Congo. Many of them live in this country, residing mainly in Kasai provinces. The Luba-Kasai tribe consist of many sub-groups or clans who speak various dialects.

When somebody among the Luba-Kasai tribe passes away, the first thing the family does before people arrive, is take care of the body. They shave the hidden hair, cut the nails, clean and dress the body in the best clothes they have, including the shoes. After that is done, they start crying. Neighbors then join the family to grieve with them. Soon, men come to prepare the shade to keep the body outside for the community to be together with the body for the last time. Close family sits around their loved one allowing them to see him better and to touch him. They cry loudly when friends and other members of the family come. The newcomers cry and hug those sitting on the ground to grieve together.

Out of respect for the body, people do not eat heavy food, only drinking coffee, tea, and eating small snacks. They do not work in their fields either. They do not bathe as long the body is still among them. The in-laws, friends, and relatives bring beautiful new unfolded sheets to give to the dead person as the symbol of the last clothes for him to wear. The mother of the wife sits inside with her siblings because the tradition doesn’t permit her to be close to her in-laws. Also, men sit separated from women. During the mourning period people sing traditional or Christian songs. After three days, the funeral service is held either in the church or traditional way. After the service the body will be taken to its final resting place. At the graveyard, the close family always sits closest to the coffin to see him for the last time. Before covering the grave, some members of the family take to soil to throw on top of the coffin. After that, men cover the grave. This is the hardest time, the moment of separation, the grieving and crying, while the burying work is taking place. Afterwards, upon arriving home, they eat heavy food and bathe. People continue to stay with the family during this time. Friends bring food and drink. They sing Christian songs or traditional ones. They joke and try to soothe the pain in the family. Sometimes they invite folk groups to come to dance and people join them for fun.

The closing of the whole process or “Kutangala kua madilu”, in luba language, comes after seven days. That day people don’t cry any more. They sweep the house to throw the old soil out to cover his footsteps and start a new life by those left behind. That day people have a big celebration with food, drink, and dancing. They tell the family to think about the future and have courage to go on. At the end the ceremony people go back to their homes except the close relatives who stay with the family for about 40 days. After a few more days, the relatives leave too. Meanwhile, friends will continue to come back to visit from time to time.